Lawyers and judges will need training in technology if they are to resolve business disputes in the 21st century, according to a High Court head of division. In the latest in a series of wake-up calls on the challenges and opportunities created by artificial intelligence and blockchain distributed ledger technology, Sir Geoffrey Vos, chancellor of the High Court said it is ‘remarkable’ that legal basic training has changed little in the 45 years since he began reading law at university.

In the near future, he said, lawyers will need to understand technology, ‘not so as to become computer code experts themselves, but so as to be able to resolve a dispute arising from a transaction on the blockchain that some argue will not require any legal foundation at all’.

Vos also told the Foundation for Science and Technology that the commercial courts would have to do more to provide effective dispute resolution services in an increasingly competititve world. This includes moving away from the traditional physical hearing. ‘I am sure that some preliminary or interlocutory issues could quite easily be resolved entirely justly without gathering all the parties at a physical hearing weeks or months after the case has begun,’ he said. ‘The lawyers’ task in business disputes should be to simplify the issues to enable them to be resolved in the most appropriate cost-effective manner.’ 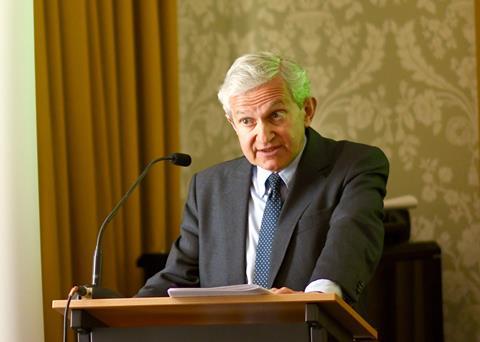 ‘We are probably too hidebound by our procedural rules and our long-established practices,’ Vos said. ‘Greater flexibility and imagination could cut through the most difficult questions and mean that oral evidence at a synchronous hearing could become the exception rather than the rule.’ More participative judges, ‘asking questions, directing evidence and resolving cases stage by stage… could probably resolve or decide the majority of even lengthy trials by an iterative online process’.

Vos also enthused about the possibilities of ‘telepresence’ videoconferencing. ‘Those who that have participated in a telepresence meeting will know that you see the other participants, often physically present in several different countries, seemingly sitting across the table from you,’ he said.

However he said this vision for virtual justice came with two caveats. The first is cost: ‘simultaneous transcription services and the case management systems that allow for paperless trials are expensive and, at the moment, are paid for by the parties’, he noted. ‘It is important to ensure that we consider how digital processes can be made available to business litigants in the biggest cases as well as the smaller ones.’

A second caveat is the need to respect ‘a number of core principles of our justice system’ – in particular, open justice. ‘If court hearings were no longer to be the norm, we would need to find ways of ensuring appropriate public access to the digital judicial process. Under no circumstances can justice be delivered behind closed doors.’